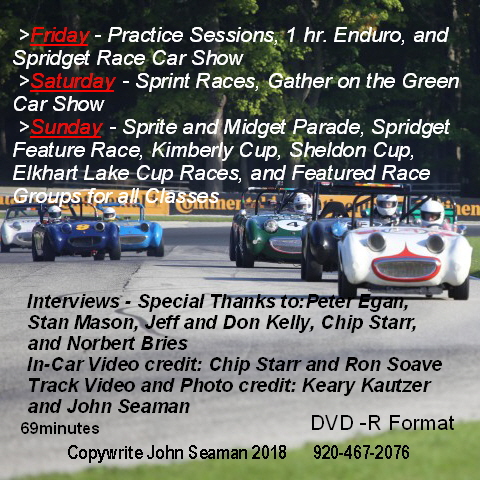 B and C Race Group
http://redlinephoto.com/event-gallery/b-c-race-group-vscda-gingerman-may/

The dates for the FF50th have changed!  The event has been moved up one week to September 11-15, 2019.  Please adjust your calendars and travel plans accordingly.  More FF50th news will be posted on this page as it happens.

Big news! The Vintage Sports Car Drivers Association (VSCDA) will be hosting a 50th anniversary party for Formula Ford at Road America September 11-15, 2019.  Please note that the dates for the FF50th have been moved up one week!

The FF50th will be a five-day event starting with registration and tech on Wednesday, paddock load-in and untimed practice on Thursday, qualifications with a group photo on Friday, and concluding with heat and feature races on Saturday and Sunday.

Open to Kent-powered Formula Fords of all ages, there will be two race groups allowing a total entry of 200 cars. Tire rules (for both slicks and treads) and licensing requirements are being written for maximum inclusivity.

The FF50th will headline the 2019 Elkhart Lake Vintage Festival, the VSCDA’s marquee event. Mike Korneli is the ELVF race chairman. Steve Beeler will be organizing the FF50th related aspects of the weekend.

The objective is to get as many drivers into the FF50th as possible. To that end, crossover entries (that is, a driver entering one car in both Formula Ford race groups…two drivers sharing one car is not a crossover) will be tentatively accepted up to the entry deadline. If there are less than 200 entries at the deadline, crossover second entries will be confirmed in entry date order until both race groups are full. After the entry deadline, late entries will not bump a crossover out of a race group.

Logbooks and annual techs are required at VSCDA events. If your car does not have a logbook, you can obtain one from the VSCDA tech inspection team. Annual techs from other racing organizations (VMC member clubs, SCCA, CASC, etc) will be honored. A pre-race survey will be sent out before the event to assess the logbook and annual tech work load.

A possible surprise is the requirement for a Car Preparation Sheet. Before an entry will be accepted for a VSCDA events, a car must have an up-to-date CPS on file with the VSCDA office. Here is the link to the one-page form:

The following requirements must be met to race at a VSCDA event including the FF50th:

VSCDA annual membership is $120 with an “early bird” special price of $100 if purchased by mid February. A one-event membership for the Elkhart Lake Vintage Festival (the FF50th’s host event) is $75. If you are thinking about the value of an annual membership, VSCDA holds races at three other fine venues: GingerMan, Blackhawk, and Grattan.

Because the FF50th will only have two race groups, we are expecting enough entries to fill both with 100 cars each. The FF50th entry policy will be to accept the first 200 entries and then group them in the best possible way. I see a process that fills Group A and Group B simultaneously by speed potential and also by drivers who want to race against each other.

Here is a preview of the criteria that will be used to assign cars and drivers to race groups:

Cross-over Entry?
Multi Driver Entry?
Drivers, clubs, or series you want to race with?
Group preference (A or B)?

This data will be collected during the early entry process which will go live this October. Two series have already reached out about racing together at the FF50th: the Royale Formula Ford Challenge Series and Formula Ford “The Series”. If there are drivers that you want to race with at the FF50th, it is not too early to get organized and put a list together.

More details on this topic to follow as the early entry process is finalized.

The FF50th will be open to Kent and Cortina powered Formula Fords of all ages.

Rules stability ahead of a big event is a good thing. So that everyone can prepare with confidence, the FF50th will also reference the 2015 SCCA GCR for Kent and Cortina engine rules.

The FF50th will be open to Kent (and Cortina) powered Formula Fords of all ages.

The VSCDA Technical Requirements for Race Cars follows Monoposto Racing rules which list eligible Historic (pre 1973) and Club (1973 – 1982) commercially constructed cars. To define chassis eligibility for the rest of the Formula Ford universe, the 2015 SCCA GCR will be referenced.

Just what exactly is a Formula Ford? Everyone knows the basics: a single seat, tubular frame, flat bottom, open wheel racing car. The 2015 SCCA GCR, which is also being referenced for Kent and Cortina engine specifications, will provide the rest of the details.

Registration for the FF50th @ Road America will open this fall.  The on-line registration process will include a questionnaire for race group placement:  chassis, tires, shocks, driver experience, etc.  The questionnaire will also provide an opportunity to indicate that you belong to a series (The Crossflow Cup, Royale Formula Ford Challenge, etc).

Initially, entries will be placed into one of these five classifications.  Based on entry composition, preliminary classifications may be further defined and sub-divided in order to fit 200 cars into two race groups.

Late Registration.  Late registration will open in May 2019.  Late entries will be subject to the non-refundable deposit as well as a late entry fee.

If both FF50th race groups are over-subscribed, overflow entries will be given the option to race in another ELVF race group.  For all entrants, the balance of the entry fee will be due at event registration.

Paul Page, the “voice” of the Indy 500, will be the banquet speaker at the Elkhart Lake Vintage Festival / FF50th banquet Saturday September 14, 2019 at the Osthoff Resort in Elkhart Lake, Wisconsin.  Formula Ford’s 50th anniversary in North America will be celebrated at the ELFV, the Vintage Sports Car Drivers Association’s marquee event.

Kent-powered Formula Fords of all ages are welcome at the FF50th.  There will be two race groups allowing a total entry of 200 cars.  Click here for the VSCDA’s pre-registration page:  https://vscda.org/ff50th-road-america-pre-registration/

For more information on the event, click here:  https://stevebeeler.com/ff50th/

FF50th pre-registrations (227 cars as of March 5) have exceeded not only expectations but the 200 car limit imposed by two Formula Ford race groups (2 race groups x 4 mile track x 25 cars per mile).  To accommodate the still growing entry list, a third Formula Ford only race group has been added to the FF50th’s schedule.

Cars will be assigned to the three race groups as follows:

Second entries on Group A and Group B cross-overs (one driver and one car entered into two race groups) will be bumped “up” into Group C space permitting.  Group C cars interested in more seat time will cross-over into the VSCDA race group where Formula Fords usually race.  That group is going to be very light with a few vintage non-winged FB’s and even fewer FJ’s.

Cross-over entries will be confirmed beginning August 1.  Once confirmed, cross-overs cannot then be bumped by a regular entry.

The overflow plan previously announced is no longer in effect.  Entries will be capped at 300 cars.

Long-time Formula Ford aficionado Paul Pfanner (Racer Media & Marketing) will be producing the FF50th program.  RACER’s August issue will feature Formula Ford’s 50th anniversary.  For the program, Paul will customize the magazine with a special cover and an insert with FF50th focused content (schedule, entry list, paddock locations, etc).  The insert will have the look and feel of FORMULA magazine from back in the 1970s.  No doubt the FF50th program will be an instant collector’s item.